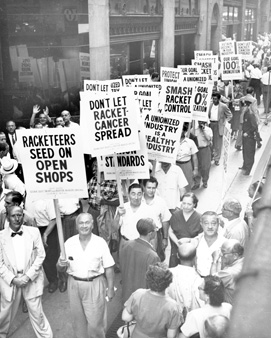 During David Dubinsky's presidency of the ILGWU from 1932 to 1966, the ILGWU grew in numbers, influence, and ambition. During this period, the union's membership more than doubled in size, with more locals than ever throughout the United States, Canada, and Puerto Rico. In the three decades of Dubinsky's tenure, the ILGWU ran successful organizing campaigns, won significant concessions from manufacturers, and expanded the elements of social unionism for which the union had become so well-known.

As more garment workers in New York City joined the union, manufacturers sought to establish shops where they could hire non-unionized workers and thus turn a greater profit. When these "runaway" shops opened up in New England, central Pennsylvania, and the Southeastern United States, the ILGWU followed. The union created the Cotton Garment and Miscellaneous Trades Department to begin organizing shops in New England and some parts of Pennsylvania and New Jersey, and sent staff to the Upper South and the Southeastern United States to organize in those regions. Organizers reached out to workers at newly-opened shops in these areas, and eventually established district councils and regional departments to gain members and represent these "out-of-town" workers. The international leadership believed that this approach to organizing would be more successful than trying to contain garment manufacturing to New York City.

In 1950, with union membership nearing its peak, the ILGWU established its Training Institute to educate the union's next generation of organizers and other staff. The institute offered successful applicants one year of intensive training in labor education and leadership. Under the direction of Arthur A. Elder, the institute offered courses and lectures led by ILGWU staff and prepared students for work within the union. After graduation, participants in the Training Institute were placed in staff positions with the ILGWU, such as organizer or business agent. Some graduates of the Training Institute rose to position of leadership, as was the case with Sol Hoffman and Nick Bonnano, who became regional directors, and Jay Mazur, who eventually was elected president of the union. The ILGWU later offered its staff less formalized training than the institute; by 1980, trainings ran two or three weeks, but covered some familiar topics, namely "every aspect of the ILGWU-its activities, history, benefits programs, structure, policies" and other topics of more general interest.1 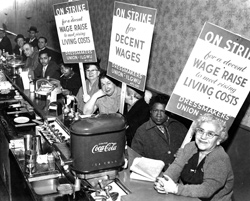 Another result of the union's organizing efforts in the more geographically-dispersed ladies' garment manufacturing industry was the formation of the Master Agreements Department in 1965. Under the direction of Wilbur Daniels, this department acknowledged the increasing trend for companies to have shops in multiple locations. It replaced the practice of having local union officers sign contracts with single shops, and instead negotiated one single contract that covered all shops owned by the same company. Local and regional officers worked with the Master Agreements Department staff and the ILGWU counsel to negotiate supplements to the master agreements.

1. General Executive Board Report to the 37th Convention, page 58.