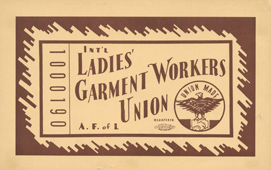 The ILGWU was formed on June 3, 1900, by eleven delegates representing local unions from the major garment centers in New York City, Philadelphia, Baltimore, and Newark. These local unions' memberships numbered about two thousand workers and were comprised primarily of Jewish immigrants, many of them socialist, who had recently arrived in the United States from Eastern Europe. Many had been active trade unionists before coming to America, and in some instances, had participated in or organized unions upon arrival.

Seven local unions were represented at the International's founding meeting, and their delegates agreed that the efforts to improve working conditions within their cities would benefit from a national organization of workers in the ladies' garment trade. They agreed to name the new organization the International Ladies' Garment Workers' Union, and that it would affiliate with the American Federation of Labor. At the founding meeting, Herman Grossman was elected the first president of the ILGWU, and Bernard Braff was elected the first secretary-treasurer.

The ILGWU chartered only four of the seven local unions at the founding meeting - the Cloak Makers' Union of New York Local No. 1, the Cloak Makers' Protective Union of Philadelphia Local No. 2, the United Cloak Pressers of Philadelphia Local No. 3, and the Cloak Makers' Union of Baltimore, Local No. 4. Soon after, local unions in Boston, Chicago, Cleveland, Detroit, Kalamazoo (Michigan), and San Francisco were organized. According to Louis Levine, "The life of the locals during these early years was a succession of shop strikes, of propaganda and shop meetings, of injunctions fought (the most important of which was that against the cloakmakers' local of Racine, Wisconsin). The work of the International consists chiefly in trying to get the locals to join it, in smoothing out differences between locals in the same city, in helping to organize district councils and joint boards, in settling jurisdictional disputes, in enforcing boycotts and in agitating for its label."1