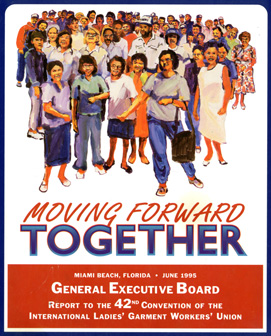 By the mid-1990s, as the women's garment manufacturing industry in the United States continued its decline, the ILGWU's strategy to remain strong and viable was to merge with the Amalgamated Clothing and Textile Workers Union.

ACTWU was itself the result of a merger of two unions. The Amalgamated Clothing Workers of America (ACWA) and the Textile Workers Union of America (TWUA) were formed in 1914 and 1939, respectively, and joined together in 1976 to become the largest union representing workers in the textile and men's garment industry. In its earlier years, the Amalgamated, like the ILGWU, was well-known for its social unionism and its longtime president Sidney Hillman. In the 1970s and 1980s, as the ILGWU was promoting its Union Label and organizing against the increased importation of garments into the United States, ACTWU was known across the United States for its ultimately successful boycott of the textile manufacturer J.P. Stevens.

For decades, differences in the work of the men's and women's garment industries had compelled the ILGWU and Amalgamated Clothing Workers of America to remain separate. These differences included political differences between the unions' leaders, such as those between ILGWU president David Dubinsky and Amalgamated President Sidney Hillman. They also included matters of how piece rates were figured, and how seasonal changes in fashion affected women's apparel manufacturing more than it did the men's.

As both the men's and women's garment industries faltered, however, the international leaders of the two unions reconsidered their historic separation. In the 1990s, the ILGWU and the Amalgamated began talks to merge the unions, and by February 1995, the General Executive Boards of the two unions voted unanimously to merge. At the ILGWU's final convention in Miami Beach, Florida in June 1995, the delegates to the international meeting approved the boards' proposal.

The new union, named the Union of Needletrades, Industrial and Textile Employees (UNITE), was led by former ILGWU President Jay Mazur. In 1995, UNITE had a membership of about 250,000 in the United States, Canada, and Puerto Rico.