David Dubinsky was the longest-serving president of the ILGWU, leading the union from 1932 to 1966.

After being imprisoned and later exiled for his involvement in a bakers' union of the General Jewish Workers Union, also known as the Bund, in 1908, he escaped from the small Siberian village to which he had been exiled, returned to Lodz, and resumed work as a baker with an assumed name. In 1911, Dubinsky arrived in New York City and became a member of Local 10, the cutters' union of the ILGWU.

Under Dubinsky's leadership, the ILGWU's membership grew tremendously. Reaching over 450,000 in 1957, the ILGWU was indisputably one of the largest and most powerful unions in the United States. This growth translated into significant benefits established for union members, including the establishment of a Death Benefit Fund (1937), negotiation of the ILGWU's first contract with a retirement plan (1943), and creation an ILGWU Staff Retirement Fund (1946). The union's central office also grew during this period, including the creation of the Management-Engineering Department (1941), Legal Department (1947), Political Department (1947), and Investment Department (1956). The ILGWU's Labor Stage, WFDR, and other cultural programs flourished during this period.

While president of the ILGWU, Dubinsky was deeply involved in state, national, and international politics. In 1936, he joined in founding the American Labor Party in New York State and served as Democratic Party elector for the ticket of Franklin D. Roosevelt and John N. Garner. In 1944, he participated in the founding of the Liberal Party of New York. He helped found the International Confederation of Free Trade Unions, and was an important figure in the Free Trade Union Committee. Also, he served on the board of the Labor League for Human Rights, the Jewish Labor Committee, and the Post-War Planning Committee. He was also a part of the Americans for Democratic Action (ADA), Freedom House, and was the AFL’s delegate to the Economic and Social Council of the U.N. Highlighting his lifelong belief in and support of democratic leaders and institutions, most notably after World War II, he and the ILGWU worked with others to rescue the leaders of anti-fascist unions and resistance movements.

He brought many extraordinary people into the union who believed in the importance of the ILGWU’s cause, including Evelyn Dubrow, the ILG’s lobbyist in Washington, a force of nature, and recipient of the Presidential Medal of Freedom. The ILGWU was the first union to establish and support a union health center, which was later recognized under President John F. Kennedy by an act of Congress, and later rededicated by President Lyndon B. Johnson. The union’s education, civic and other programs for members were blueprints for other unions, and its engineering department, which worked with manufacturers, was innovative and groundbreaking.

A committed Bundist from his childhood days, he had a deeply ingrained belief in justice and human dignity reflected in his work and personal life, and he was recognized many times over for this. He received numerous honors and awards, among them honorary degrees from Columbia, Brandeis, Temple and Roosevelt Universities and Bard College. In 1966, he received the Freedom Award from The International Rescue Committee awarded for “extraordinary contributions to the cause of refugees and human freedom”, joining, among other recipients, Winston S. Churchill, Elie Wiesel, and Willy Brandt. He was awarded the Presidential Medal of Freedom (1969) by President Johnson, and was inducted into the Labor Hall of Fame (now Honor) in 1993 under President Clinton. His portrait by John Sloan, of whom he was a friend, hangs in the National Portrait Gallery in Washington D.C.

After retiring from the presidency of the ILGWU in 1966, Dubinsky became the founding director of the Retiree Services Department. He held that position until his death in 1982.

View a copy of Dubinsky's letter of resignation 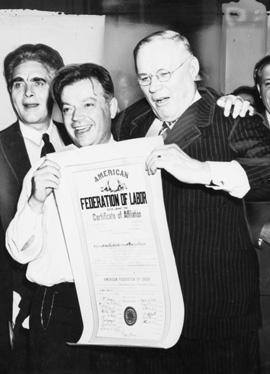