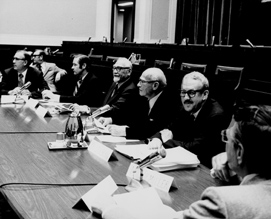 By the 1970s and 1980s, what had been the slow decline of the United States garment manufacturing industry was accelerating. The ILGWU's responses to this trend were varied, innovative, and ambitious. In addition to giving testimony before Congress on manufacturing and trade issues, during this period the ILGWU began an aggressive Union Label campaign, cooperative ventures with industry and government to support the domestic garment industry, and the first Immigration Project within an American union. The union was taking innovative approaches to its relationships to mass media, government-industry cooperation, and immigration.

Since its founding, the ILGWU was eager to promote the use of labels, sewn into garments that would indicate that they were made by union workers. With an increasing number of companies opening firms outside of the United States, the ILGWU was compelled to launch it most widespread campaign for the Union Label yet. Beginning in 1975, the ILGWU promoted its Union Label in print, radio, and television. Spots on radio and television featured performances of the song "Union Label," which appealed to shoppers' desire for quality and to the need to support American workers. Malcolm Dodds composed the music; Paula Green wrote the lyrics; and the ILGWU Chorus performed the song. The Union Label Department also produced and distributed films that highlighted the fashion appeal of garments produced by ILGWU members.

Also during this period, the ILGWU worked with industry and government to establish organizations that could provide workers with job security and manufacturers with well-trained, unionized labor. The Apparel Job Training and Research Corporation (AJTRC), Garment Industry Development Corporation (GIDC), and Council for American Fashion (CAF), all provided training for workers and, in some instances, engineering consultation for manufacturers. The scope of these projects differed-the AJTRC was sponsored by the U.S. Department of Labor and addressed the training needs of workers all across the country, while the GIDC focused on New York City and CAF primarily supported the industry outside of New York. These programs complemented the work of the Union Label Department by providing workers with the resources to learn new skills and manufacturers with the opportunities to cooperate with the ILGWU rather than send their operations out of the United States.

Beginning at the local union level in 1983, the ILGWU's Immigration Project represented and advised individuals on immigration, naturalization, and amnesty matters. Soon after expanding to serve the ILGWU's national membership in 1986, the project was named a national Qualified Designated Entity to assist ILGWU members and their immediate families negotiate the immigration system and gain the required documentation to stay in the United States legally. In addition to providing comprehensive legal services, the Immigration Project designed educational offerings, including information on immigrants' rights under the law, civics, and English language. By the 1990s, the Immigration Project was organizing with ILGWU members and other workers to protect the rights of undocumented workers, oppose anti-immigrant ballot propositions and legislation, and support the National Coalition for Haitian Refugees.