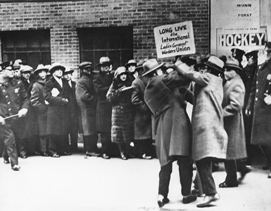 The ILGWU was an important force in organized labor. However, it faced serious challenges in expanding and even maintaining membership numbers and union funds, in part because of many manufacturers' hostile attitudes.

In the union's first decade, major strikes in Boston and New York City counted among the fledgling union's early struggles. Between 1905 and 1907, reefer-makers in New York City went on strike several times, and the last of these strikes-begun on March 22, 1907, with about 1200 workers walking out-resulted in major concessions from members of the Reefer Manufacturers' Association. The agreement compelled manufacturers to hire union members, limit the work week to fifty-five hours, abolish inside subcontracting of pressing work, provide materials and equipment to workers, and allow an arbitration board to deal with worker complains.

On March 25, 1907, about 2000 garment workers went on strike in Boston. They sought a fifty-hour work week and recognition of their union. The International originally opposed the strike, but subsequently changed its position and provided financial support to the workers at its convention later in the year. In time, some of the employers came to an agreement with the workers, while others refused and an injunction compelled workers to return to the shops. On the whole, the Boston strike was a loss for the union.

These victories and defeats were among many in these early years, and are not often remembered today. Other events, however, galvanized the ILGWU in unprecedented ways, and helped the union to grow quickly and push for major workplaces changes in the industry. In 1909 and 1910, the "Uprising of the 20,000" (1909-1910) was a strike of mostly female shirtwaist makers in New York City that was notable for its size, duration, and support from middle-class women. The "Great Revolt" of 1910, a strike of mostly male cloakmakers in New York City, was significant for the resulting agreement between the ILGWU and the Cloak, Suit and Skirt Manufacturers' Protective Association. This agreement became known as the Protocol of Peace, which included provisions for the establishment of the Joint Board of Sanitary Control, Committee on Grievances, and a Board of Arbitration, as well as other concessions.

A fire at the Triangle Shirtwaist Factory on March 25, 1911, claimed the lives of 146 young women and men who could not escape from the burning building. Locked doors from the factory floor, broken fire escapes, poor communications within the factory, and inadequate firefighting equipment made the fire more lethal than it might have been, and that realization spurred cooperation between organized labor, government, and social reformers to institute unprecedented workplace inspection and regulation.