Born in Austria, Grossman later emigrated to New York City and became a cloakmaker. A member of the United Brotherhood of Cloakmakers of New York and Vicinity, he was one of eleven delegates from local unions in New York City, Philadelphia, Baltimore, and Newark that, representing roughly 2000 members, founded the International Ladies' Garment Workers' Union. At this meeting on June 3, 1900, he was elected the union's first president. During Grossman's first term as president, the International's first local union in Chicago was formed, as well as what would later become one of the ILGWU's most powerful locals, the Amalgamated Ladies' Garment Cutters Union Local 10, was formed.

After his second term as union president ended in 1907, Grossman continued to work with the ILGWU. He was a representative of the ILGWU during the "Uprising of the Twenty Thousand" in 1909, member of the general strike committee during the "Great Revolt" in 1910. He later worked in the offices of the New York Cloak Joint Board of Cloakmakers Unions. When Grossman passed away in 1934, David Dubinsky noted that the former ILGWU president, "was not only one of the generals and leaders of the International but also one of its first soldiers who prepared the ground and sowed the seeds from which our Union has sprouted and grown." 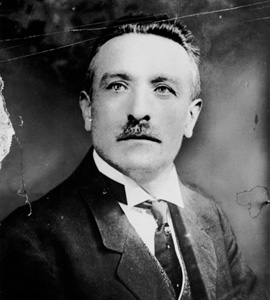